As part of the Water, Mills and Marshes Wild Watch project we’ve been circulating 2 camera traps around the schools we’ve been working with in Lowestoft. Each interested school gets a camera for two weeks to put up on school grounds and in the nearby area to see what wildlife/cats(!) prowl or flutter around both during the day and at night.

It appears, from personal experience, and the photos we received, that the positioning of the camera is important – who would have thought! The main basic lesson: don’t have a thin branch or leaves that move with every slight puff of breeze in line with the sensor.

It also seems to be a bit like fishing. Rather like the enormous fish that always gets away, that award winning shot is always just out of reach….. Animals delight in presenting their rear end to the camera. Every once in a while an eye makes it into frame or when the badger snuffles right up close we’re on a wide angle lens and it’s just a fuzzy grey blur! Definitely using

these cameras gives us all a healthy respect and even greater admiration for the incredible footage wildlife photographers and film makers generate. However, for first timers with a “whack it up and see what happens mentality”, we’ve managed to get a selection of great shots of gulls, foxes, badgers, squirrels, jays, cows, hedgehogs and deer that move around or near the Lowestoft schools. 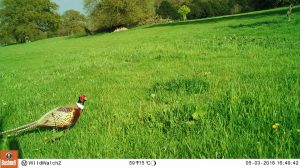 Get outside and explore the water, mills and marshes of the Broads with our Trail maps

We have many educational resources, suitable for all age groups and learning levels, available for free download on the site

Keep up to date with the latest news from the Water, Mills and Marshes project

Find events on in the Broads National Park